It certainly has been a while, hasn't it?

Looking back, the last Shoppe Column was posted on April 1st, 2006, exactly eight years ago today. A lot can happen in eight years' time. Here is just a tiny sample of the things I've done since then:

There's a reason I don't do columns like I used to. Around that time I felt there was a serious deterioration of trust among collectors, with backdoor dealings running rampant on auctions. I used to think of all of us as a group of friends who shared the same interest. Sure, whenever a rare item turned up we'd all compete to see who was willing to go the highest on it. But it was friendly competition, and everyone played fair. And then I began to repeatedly see my chance to win a rare game snatched away when people started making private offers, and the auctions started ended early. No one else seemed to have any problem with this.

Like it or not, that behavior has had an impact. I have become somewhat stingy with my information, preferring to keep it to myself rather than share it freely with people who would just turn around and cheat me. I do realize not everyone was like that -- I still share information through private email when people ask, and I've left up the columns I did write. (With the Internet being what it is, it would be pointless to take them down. The Streisand Effect and all.) But the feeling of betrayal is hard to get over, so the columns dried up. At this point I'm thinking this one may be the last.

I also remember posting a warning to SWCollect years ago, sharing the latest details of what Eyal Katz was up to, and receiving some rather venomous reactions from the very people I was trying to help. Compounded with the backdoor bidding, it felt like I was the only one who still cared about the integrity of this hobby, and with the stress from my job I needed normalcy in one part of my life, so I ended up pulling away. Between that and the incident with the 'Bay in October 2006, I sort of went into recluse mode for a while, but I never stopped collecting. It just became more challenging. I had to rely on CraigsList, traffic from Bonanza, mom-and-pop computer stores that still had old software lying around, and visitors to the Shoppe who happened to have things I was looking for. Things probably would have stayed that way, except that last year I was contacted by someone who offered me the chance to purchase a huge lot of Infocom items.

Yes, that huge lot of Infocom items. I think it's finally time to reveal my source. Click and drag over the InvisiClues hints below to learn the answer.

I hadn't had any communications with any of the former Infocom staff in years, but in August of last year, she contacted me. I was thrilled, as that told me the YOIS "brand" I'd built years ago still has value. At the time she was working on Talking Writing, a non-profit online literary magazine that supports professional writers and journalists (they even did an interview with Steve Meretzky at one point), and was raising money to cover the cost of running it while trying to get government and foundation funding.

She put together a list of everything she was willing to part with, and I made her an offer, with the added promise that I'd kick some more back to her if something ended up going for an insane amount higher than what I'd anticipated. She accepted, and toward the end of 2013, my depleted stock of Infocom games replenished itself overnight. I was able to fill in a number of gaps in my collection, and suddenly found myself with a bunch of promotional and internal items, often multiples of the same piece.

These were something of a dilemma, since I had no way to accurately value them. They're the sort of things that don't turn up often, usually auctioned by a former Implementor who held onto them. Really, the best way to handle something like this is to auction it. But after my experience with the 'Bay, I was not going back to them.

I looked around at other auction sites, but didn't find any I felt comfortable with. GameGavel was probably the best, but they still charge fees and I wasn't sure they had enough traffic for items like this. They had some Infocom titles listed at the time, but they all had buy-it prices. They seem to be more focused on vintage consoles. Then I realized, while I may not get the same level of traffic here, I do get exactly the type of traffic I would need. I have the YOIS brand I've built up over the years. I could auction these myself.

Then I realized, this is actually something I'd wanted to do for years. But until now, it wasn't practical, because a lot of what I normally sell and trade can simply be acquired elsewhere. These items can't. By giving the regular collector base I deal with the exclusive chance to acquire these items, I would have the audience I need.

So I sat down, and designed a site that would get around every needless, pointless aggravation I'd experienced in the past with eBay. Then I coded it.

There's a whole page dedicated to questions you might have, but here's a rundown of the basics:

I've started things out with just three listings -- that Starcross saucer you might have seen in the pictures, a Personal Software Zork, and a vendor sell sheet for one of Infocom's titles. There will be much more added in the coming weeks, including press invitations and dealer kits for some of the Infocom games, rare stuff you've probably never seen before. And you can only get it here.

I wrote this ages ago but never got around to posting it. Found it in the ruins of my old hard drive. If this indeed turns out to be the last Shoppe column, at least they're ending on a high note. (You are welcome to share, just please, give me credit and a link to the Shoppe.)


Yo, west of a white house, up on a hilltop
I'ma welcome all y'all to Ye Olde Infocomme Shoppe
Open the door and go check out the store, man
Inside you find the one and the only C.E. Forman,
Gaming historian, always informin',
Laying down my own phat beat, never conformin'.
Expert in this field, with respect for the originals,
From the day when gameplay was all text and no visuals,
Analog not digital, old-skool, Eighties games in Z-Code rule
Infocom, with aplomb, making reading on a PC node cool.
Now the Shoppe's your one-stop, vintage systems represent, see
Apple Two-E, Atari classic 8-bit and the ST
Commodore Sixty-Four by the score, software an' more
Classic game packs racked and stacked ceiling to floor
Barely fits in the door, everywhere Spectrum Sinclair,
I got Sierra (Where?) A whole box over there, plus Electronic Arts,
Loose parts an' plenty to spare, I'ma dare to share all the wealth,
Help yourself, after I cop a copy first for my own shelf!

On the road bringin' home a carload, Saturday thrifting,
Every time I find any kinda gold mine it's uplifting.
Hobby's still thriving, so I go out driving,
Gather it all up before the supply starts nose-diving
Always a race, constantly needing more space at my home base
What for? Well I gotta store all these vintage boxes someplace
Guess it's time, I'ma go out and buy me another book case
Maybe try customized, custom-sized like Hugh Falk's displays
Labor-intensive, looks expensive, gotta find out how much he pays, maybe some day
Now back to the auctions ending soon, I refresh the listing,
eBay's site not acting right, reload hangs and damn I missed it!
Takin' a snipe, missin' the last-second shot hurts
Mano-a-mano, Playa versus Playa like Scott Kurtz
Lost it legit by a bit, but it could be a lot worse,
Backdoor bidding, you kidding? Win and still the item's not yours!
eBay tells you, "Screw the seller, long as Meg Whitman got hers!"
And yet we stay, gotta pray, someday hit a BuyItNow lot first!

But you gotta have patience, dealin' with the frustrations,
Always with the calls I gotta take about preservations,
"Help me!" screeches their constant plea, "Make me a copy!"
Wanting it free of course cuz I'm the source with the floppy
Everybody goin' spastic, always with the same tactic,
Claimin' games are only for playin', better open the plastic,
"Situation is drastic! Media decay every day, and we want it to stay,"
They exclaim, "So future gamers can continue to play 'em!" Air of despair
Floating up from the abandonware, sayin' I'm unfair and don't care,
Underdogs' Sarinee, yellin' an' tellin' me, "Yo, C.E.,
While you collectin', just don't be neglectin'
The name of the game under that shrinkwrap you protectin'!"
They disrespectin', projectin' it's the last one around
But I'm correctin', it's just the only copy we've found
An' I been checkin', prospectin' with every expert in town
So you makin' a fake one, I'ma be takin' you down
Reputation thrashed, counterfeiting ring smashed
Jimmy T, him an' Timmon never thought they'd be caught hawkin' homemade trash
You try to, I'ma find you, land you hurtin' flat on your ass
Like I did to a certain nasty rat-bastard, name of Eyal Katz!

An' I just wanna mention, my bone of contention
With playin' a modern-day adventurin' engine,
All graphical, non-magical, nothin' left to imagine
Players not even needing any reading comprehension
Timed puzzle repeated 'til you beat it, defeated any tension
Uncompleted, now you need to deal in DLC extensions
Hidden object hunt, howzat even hold anyone's attention?
Isn't any trick, don't even hafta think, it's just point-and-click
Every pic 'til by chance the answer is presented, I resent it,
Had our wheel but they feel like they got to reinvent it
Publishers passing, no more putting out the classics,
Call 'em faded, outdated, overrated, or bland,
Just don't try an' lie an' deny that there's still demand,
I mean Jesus, look at Masterpieces,
Put it up, BuyItNow eighty bucks, an' collectors seize it
Makes me believe it's time Activision re-released it
No? Oh, then don't expect our support when your stock needs it!

Game Hoardaz
Pickin' out trash diggin' for Mount Drash
Buildin' our game stash 'til we run outta cash
Openin' packs without creasin' the box flaps
Overattached to manufacturer shrinkwraps
Yo, don't try an' extort us, we all Game Hoardaz
Cruisin' UseNet groups, usin' our dupes to support us!

Yeah... We all Game Hoardaz here. 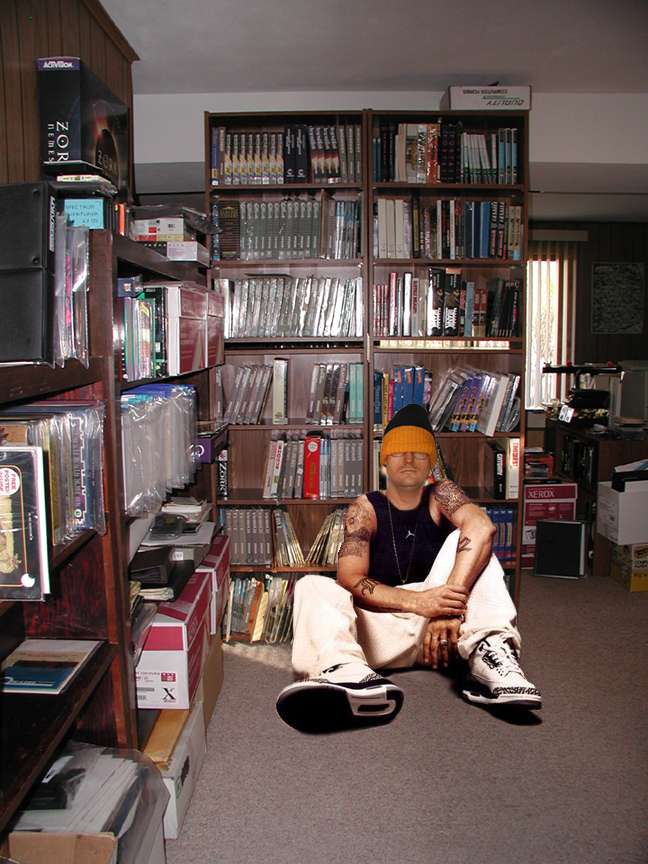 Thank you. I try. Occasionally, against all odds, I succeed.