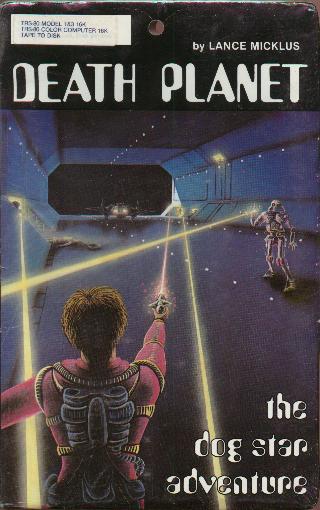 The Other-Ventures were marketed by Adventure International as a series of games by authors other than Scott Adams. Death Planet: The Dog Star Adventure by Lance Micklus is #5 in this set. This is an obscure one, compared to the rest of the Other-Venture series. For one, it's only identified as an Other-Venture on the back of the package (the others have the OV logo and a number on the front cover).

Dog Star was originally published in the May 1979 issue of Softside, a TRS-80 magazine, as source code that ambitious readers could type in themselves (and modify to create their own adventures, it turned out). It was the first adventure game to be published this way.

Lance Micklus wrote a number of non-adventure games that Adventure International published, including a checkers program and several arcade games. Apparently AI also decided to re-release Dog Star Adventure as part of the Other-Ventures series. The "Death Planet" title heading is AI's addition. I doubt this was released for any system beyond the TRS-80. Also not sure whether it uses the same game file format as the other Other-Ventures (which themselves are in a different format than the Scott Adams Adventures). It could simply kick off the TRS-80 BASIC interpreter.

For more information, and a download of the original source code, visit the Dog Star page on Adventureland.